The US House of Representatives committee investigating the Jan. 6, 2021, insurrection at the nation’s Capitol is nearing a more public phase of its work. Televised hearings are set to begin on June 9, with at least two expected to be held in prime time for maximum exposure. After that, the committee of seven Democrats and two Republicans will report its findings sometime before the midterm elections on Nov. 8. Former President Donald Trump and his Republican allies continue to call the probe a witch hunt focused on scoring political points.

1. What has the committee done?

It’s conducted more than 1,000 interviews and collected more than 100,000 documents, including emails and texts. It held a public hearing in July 2021 to hear testimony from police officers at the Capitol who came under attack. It’s issued at least 99 subpoenas for witness testimony and document production; in four instances where the recipient hasn’t complied, the Democratic-controlled House has voted to pursue charges of contempt of Congress.

2. What does the committee hope to learn?

Chairman Bennie Thompson, a Mississippi Democrat, has said the panel’s work seeks to “uncover the facts, tell the American people the full story of January 6th and ensure that nothing like that day ever happens again.” One focus is what role Trump and his advisers played in efforts to overturn the results of the 2020 election — which he lost to Democrat Joe Biden — or to organize the events that preceded the storming of the Capitol while Congress was certifying the results of the 2020 elections. Another is what explains the 187 minutes of inaction before National Guard troops and additional police were sent to the Capitol. Other areas of inquiry include why the Capitol and federal and local law enforcement agencies weren’t better prepared, whether any lawmaker gave a tour of the Capitol on Jan. 5 to members of the public casing the building for the next day’s incursion, and whether there were crimes or violations of campaign finance law in the funding of events to promote claims the presidential election had been stolen.

3. What has the committee learned?

Much of that is private, for now. Some of the biggest early committee headlines stemmed from text messages sent or received by Trump’s White House chief of staff, Mark Meadows, on Jan. 6 or in the days leading up to it. The texts, provided to the committee by Meadows, include messages to him from members of Congress and others pleading for Trump to call on his supporters to stop the assault. Other texts show Ginni Thomas, the wife of Supreme Court Justice Clarence Thomas, advocating for invalidating the results of the 2020 presidential election. The committee revealed in March it had uncovered a more-than-seven-hour gap in White House telephone logs of Trump calls during the riot — a period when lawmakers were urgently trying to get him to quell the mob.

4. Could the committee’s work lead to criminal charges?

Lawmakers aren’t law enforcement, and the Justice Department is already separately prosecuting more than 800 people for their actions at the Capitol. But the committee could send the Justice Department any evidence it believes shows additional criminal wrongdoing, via a so-called criminal referral. Thompson said on May 17 that the Justice Department had requested access to some of the committee’s interview transcripts. In legal filings on March 2, the committee suggested it may have evidence that Trump and his associates committed crimes — including obstruction of an official proceeding, a felony that carries a maximum sentence of 20 years in prison — in trying to prevent Congress from certifying the 2020 election results. Committee investigators have information on strategies by Trump advisers to audit or impound voting machines in key 2020 election swing states, for instance.

Trump’s actions and actions are central to the timeline of Jan. 6. The committee’s vice chair, Representative Liz Cheney of Wyoming — one of the panel’s two Republican members — said on Jan. 2, 2022, that the committee has “firsthand testimony now that he was sitting in the dining room next to the Oval Office watching the attack on television as the assault on the Capitol occurred.” She said Trump “could have, at any moment, walked those very few steps into the briefing room, gone on live television, and told his supporters who were assaulting the Capitol to stop.” Not doing so, she said, was a “serious dereliction of duty.”

6. Who hasn’t complied with the committee?

Former White House Deputy Chief of Staff for Communications Dan Scavino, former trade adviser Peter Navarro and former Trump strategist Steve Bannon refused to comply with subpoenas seeking their testimony. So did Meadows, even as he initially complied with the committee’s request for text messages. Their matters were referred to the Department of Justice for potential criminal prosecution. Bannon and Navarro have been indicated; Bannon is set to go on trial in July on two counts of contempt, which can potentially carry a penalty of up to a year in jail plus a fine. The committee says it has subpoenaed five Republican House members, including the Republican leader, Kevin McCarthy, who spoke to Trump by phone during the Capitol riot. McCarthy resisted complying with his subpoena, challenging the committee’s legal standing. Trying to compel testimony from sitting members of Congress is legally complicated and underscores a key facet of the case: Lawmakers were participants in some of the events on Jan. 6 and have information germane to the probe.

7. Why the lack of cooperation?

In remarks echoed by other Republicans, McCarthy argues the committee is partisan and “not conducting a legitimate investigation.” Some of those refusing to cooperate cited Trump’s claim of executive privilege, the limited right of a president to decline requests from Congress and the courts for information about internal White House talks and deliberations. Longtime Trump confidante Roger Stone invoked his Fifth Amendment protection against self-incrimination. Trump’s onetime lawyer, Rudy Giuliani, said he invoked attorney-client privilege to refuse to answer some questions. Part of what could be motivating the resistance is a desire to delay the committee’s progress. All 435 House seats will be on the ballot in November, and the Democrats could lose their majority. Republicans have been clear that, should they gain House control at the start of 2023, they would shut down an investigation they view as a partisan waste of taxpayer dollars.

8. Why is the committee dominated by Democrats?

The Democrat-controlled House passed legislation to create the committee after Senate Republicans blocked the creation of an outside commission, independent of Congress, modeled on the one that investigated the Sept. 11, 2001, terror attacks. Then, when House Speaker Nancy Pelosi refused to seat two of McCarthy’s choices for the panel, he pulled his other picks. The two Republicans Pelosi named to the panel, Cheney and Adam Kinzinger of Illinois, are both Trump critics who have become regular targets of attacks from within their own party.

Tue Jun 14 , 2022
On Wednesday, Kenya’s 12th parliament passed the controversial 2020 proposal that seeks to regulate “anyone who employs technologies to collect, process, store or transfer information for a fee”. First introduced in 2016 by majority leader, Aden Duale, and supported by Kenyan MP, Godfrey Osotsi, the wide-sweeping and vague ICT Practitioners Bill […] 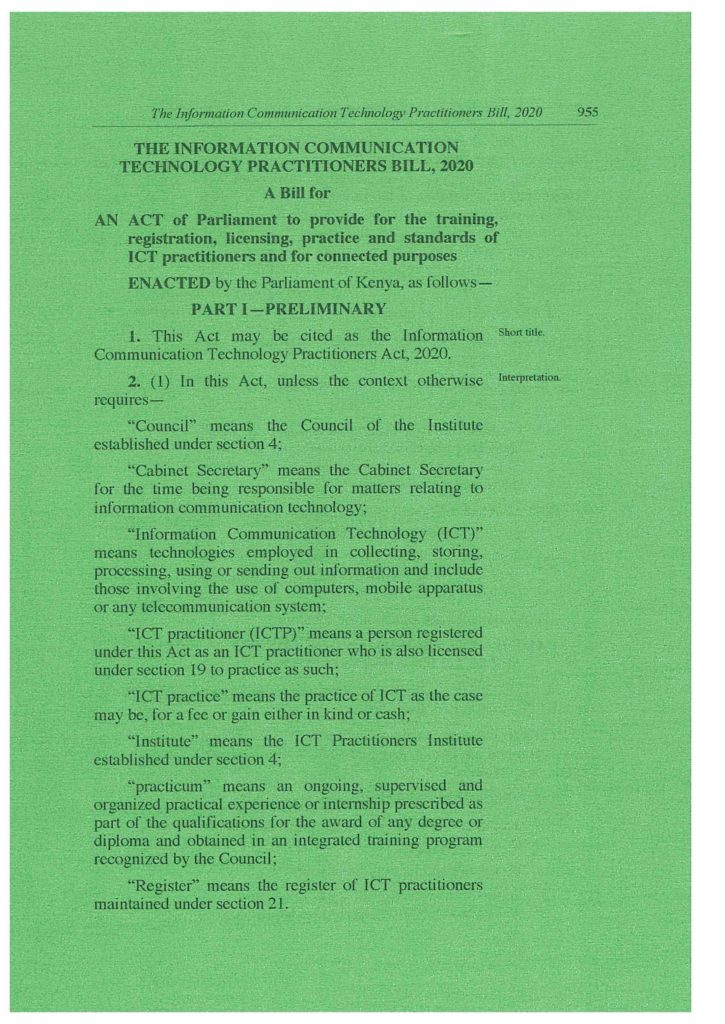