A group of legal scholars from around the world are working to make “ecocide” an international crime alongside genocide and war crimes.

A panel of 12 experts from the Stop Ecocide Foundation came up with a legal definition of ecocide, and are calling on the International Criminal Court (ICC) to adopt it.

The draft law defines ecocide as “unlawful or wanton acts committed with knowledge that there is a substantial likelihood of severe and widespread or long-term damage to the environment being caused by those acts.”

“I think the zeitgeist right now is to recognize there is a gap, and the international criminal laws, as such, need to focus not only on human beings, but on the environment on which we are so very dependent,” panel co-chair Philippe Sands, a law professor at the University College London, told As It Happens guest host Duncan McCue.

The idea was to come up with a definition big enough to encompass destructive acts like nuclear accidents, oil spills and deforestation, while not punishing regular people for everyday activities like driving to work and heating their homes, said Sands.

“It had to be really serious and really grave,” he said. “It will be for international judges to decide whether a line has been crossed in terms of the harm and who particularly is responsible for crossing that line.”

If the ICC’s member states adopt the law, it would be the fifth crime under the court’s purview, alongside war crimes, crimes against humanity, genocide and the crime of aggression.

The global community hasn’t recognized any new international laws since the prosecution of Nazis at the Nuremberg trials of 1945.

He pointed to the devastating effects of climate change worldwide, including the recent heat wave on the West Coast of Canada and the U.S. that caused hundreds of sudden deaths and sparked more than 200 wildfires in B.C., including one that gutted the town of Lytton, B.C.

While the draft law is intended to fight climate change, the panel’s definition doesn’t actually include the term. Sands said that was intentional.

“The group took a view that it was best not to start listing particular effects, because once you start listing some, you exclude others and you send a signal that other kinds of harm are somehow OK. So we thought the lesser evil, so to speak, was to not mention anything. The definition plainly encompasses climate change,” he said.

“But there was another reason, I think, not to mention climate change that I was particularly attached to. I think if the definition had explicitly mentioned climate change, it would have been dead on arrival because, as you know, countries have spent 30 years negotiating conventions on climate change. And the idea that somehow they would instantly criminalize certain activity by signing on to this, I think would have frightened a lot of countries.”

The ICC is made up of 123 member states, including Canada. Two-thirds of those countries would have to ratify the amendment to add the crime of ecocide.

As It Happens has reached out to Canada’s Ministry of Justice for comment.

The ICC is limited in scope. It can only investigate and prosecute crimes committed within member states, committed by nationals of member states, or crimes referred to the court by the United Nations Security Council.

And it can only prosecute individuals, not governments and corporations, which are responsible for some of the world’s greatest environmental disasters.

But adopting ecocide as an international crime won’t solve the problem of climate change, he said. Just like prosecuting crimes against humanity and genocide hasn’t ended torture or mass murder.

“What those crimes did was they changed human consciousness. They basically said this is not an acceptable form of behaviour. And I think that’s the proper way to think about the crime of ecocide,” Sands said.

“Not that it will magically repair the environment from one moment to the next, but that it will make us recognize the law as one of the instruments for achieving that change that we need to take greater care of our environment.”

MORE FROM THIS EPISODE

The US needs better tools to fight transnational repression. Here’s where to start.

Sun Aug 1 , 2021
Thu, Jul 29, 2021 The US needs better tools to fight transnational repression. Here’s where to start. New Atlanticist by Gissou Nia Ruhollah Zam, an Iranian dissident journalist who was captured in what Tehran calls an intelligence operation, is seen during his trial in Tehran on June 2, 2020. Photo […] 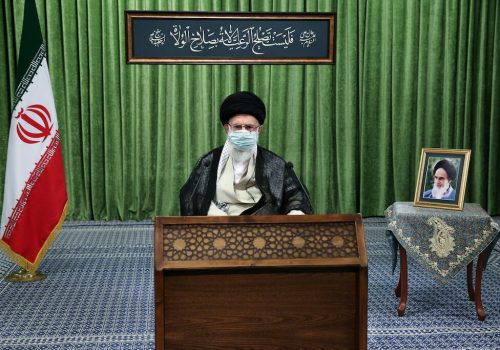