On June 9, 2022, the Islamic State (ISIS) released issue 342 of its weekly newsletter Al-Naba’.[1] The issue features an editorial titled “One Ending, Countries Torn Apart,” which comments on the summit of the Global Coalition to Defeat ISIS, held in Morocco in May 2022. The editorial argues that the international efforts to contain the growing ISIS threat in Africa will fail, as was the case in Iraq and Syria. It further calls on jihadis and backers of ISIS to support the group verbally and financially, urging them to migrate to the lands of jihad.

“The Coalition Will Fail In Africa As It Did In Iraq, Syria”

The editorial claims that the “infidels” have never ceased to build alliances and hold conferences to counter the global threat to governments and regimes posed by the State of Caliphate [i.e., ISIS], which was established on the same foundation as Prophet Muhammad’s ideology and Islam’s “inclusive” teachings.

Asserting that the Coalition’s efforts to defeat ISIS will fail, regardless of where they take place, the editorial states: “While the coalition of the Crusaders failed in its mission to defeat the Islamic State in Iraq and Syria, today it nevertheless launched a new mission to defeat the Islamic State, this time in the large swathes of Africa which represents a creedal and logistical extension of the State of Caliphate.”

It went on to say that the Coalition’s holding the meeting in Africa, i.e., Morocco, refutes the claim that its mission of defeating ISIS was successful, adding that the choice further emphasizes that the French and European military campaigns to secure the African Sahel were a failure as well.

“The coalition that failed in extinguishing the flame of jihad in Iraq and Syria, wants to export its failure today to the African arena, where jihad has been expanding in ways they did not expect,” said the editorial.

Alleging that the current situation worldwide is not favorable to a new military campaign in Africa, the editorial highlights that the U.S. and Europe are facing major economic, security, and political challenges that will further weaken Coalition military efforts in Africa.

“The Ukraine-Russia war will, Allah willing, pave the way for an era of Crusader-Crusader wars that will further aggravate the conflict between the U.S. and Russian axis,” it adds.

“The Coalition’s Mission In Africa Is To Fight Islam”

Criticizing what it described as “democracy-espousing parties,” who perceive Coalition efforts in Africa as a “pretext to cover up the rivalry between America and Russia over African resources,” the editorial says that these parties are refusing to accept that military campaigns are purely motivated by the religious imperative to fight Islam.

“The apostates refuse to see the matter from a religious angle. They constantly insist on interpreting it from a worldly perspective that is far removed from Islam, and which never falls outside the framework of conspiracy through which they mask their cowardice, defeatism, inaction, and the evasion of the path of the believers,” it argues.

The editorial claims that “the mujahideen, however, view these alliances and conferences as a continuation of the infidels’ schemes and gatherings […] The truth has one [interpretation]: It is ongoing war, throughout history, between Islam and disbelief that will last until Jesus, son of Mary, returns.” 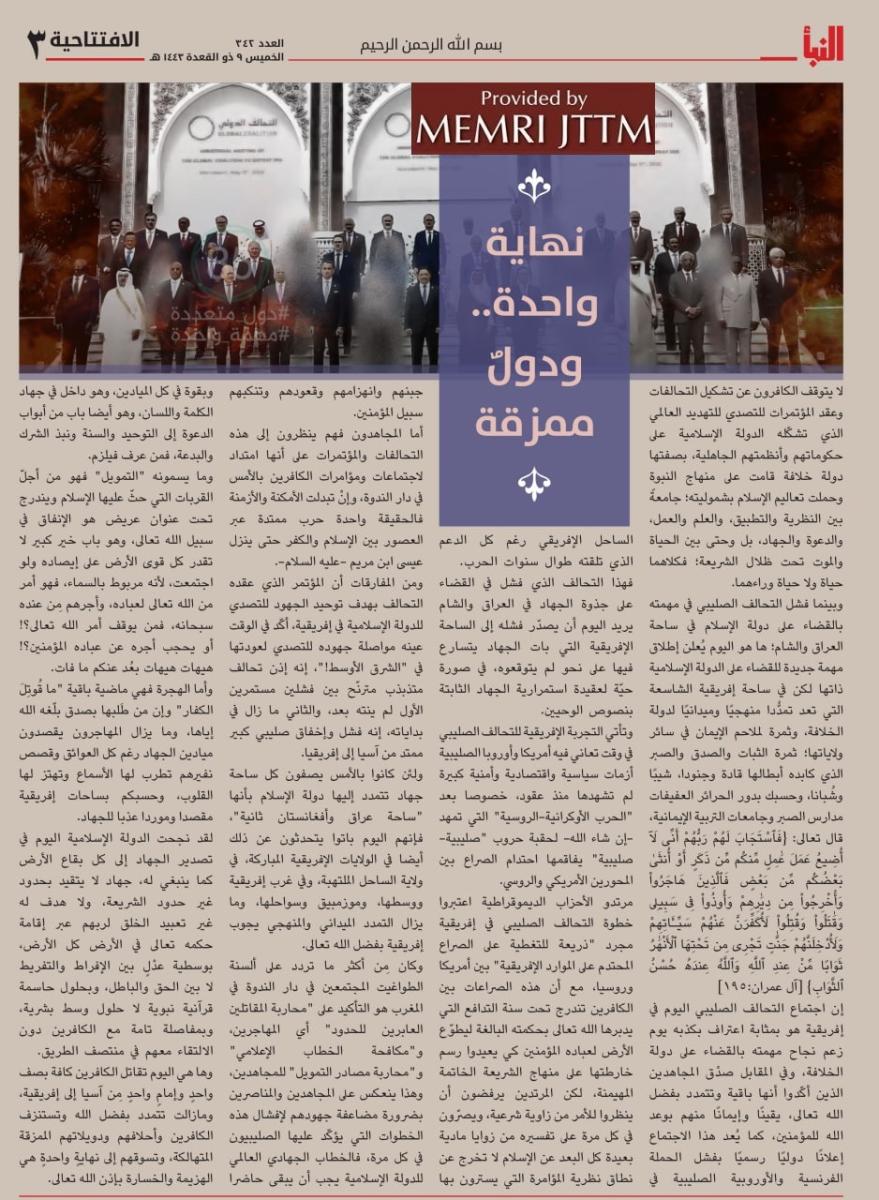 While the Coalition has stressed the need for unified efforts to counter ISIS in Africa, the editorial notes, state members have also highlighted the need to counter the group’s “reemergence” in the Middle East. It goes on to say:

“It is an indecisive coalition that wobbles between two ongoing failures, one that is not yet over, and another that is still in its early stages. It is a flagrant Crusader failure that extends from Asia to Africa. In the past, they used to describe every arena of jihad as being a ‘second Iraq or second Afghanistan.’ Today, they are talking about it in the blessed African provinces, in the flaming Sahel Province, in west and central Africa, and in Mozambique and its coastline.”

Discussing the Coalition’s determination to fight the flow of foreign fighters, to counter online media propaganda, and to track their funding sources, the editorial addresses jihadis and their supporters, saying that they need to redouble their efforts to foil these measures.

“The Islamic State’s global jihad narrative should remain ever present and forceful in all fields. This is part verbal jihad and one of the doorways to promote monotheism, sunna [i.e., the Prophet’s teaching], and to reject polytheism and novelties […] What they call funding is one of the noblest forms of donations that Islam ordered us to do. It falls under a larger context, which is spending one’s wealth for the sake of Allah the Almighty. It is a wide-open gate of goodness that no force on earth can close.”

The editorial concludes by stressing that the “Islamic State succeeded in exporting jihad to all parts of the world,” noting that migration for reasons like jihad will not stop. “Today, [the Islamic State] is one rank standing behind one imam, fighting the infidels from Asia to Africa.”

The full text of this post is available to subscribers.

Please login or register to request subscription information from MEMRI

Gun-rights activists remade the Second Amendment over past 40 years

Fri Jun 17 , 2022
Placeholder while article actions load The Second Amendment looms large in the grim ritual that follows mass shootings like the massacre at Robb Elementary in Uvalde, Tex. Conservatives cite the amendment to justify their opposition to any new form of gun control — positing that unfettered gun rights are a […]