On August 13, 2021, Illinois Governor J.B. Pritzker signed a new law impacting covenants not-to-compete and non-solicitation agreements (as to both employees and customer solicitations) in the state of Illinois. Public Act 102-0358[1] will take effect on January 1, 2022 and will police all such agreements entered into on or after that date. Prior to the signing of the Act, the validity of non-compete and non-solicitation agreements in Illinois was decided by the courts under Illinois common law and the prior version of the Illinois Freedom to Work Act, effective January 1, 2017.

The new law amends the Illinois Freedom to Work Act. The most significant changes enacted by the new law are described below. 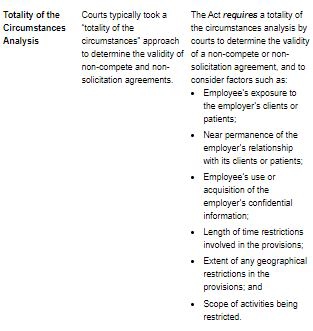 Notably, under the new law, covenants covering confidentiality; non-disclosure or use of trade secrets and confidential information; invention assignment; and reapplication of employment, do NOT constitute non-compete agreements covered by the new Act or prior law. Further, the Act does not bar or affect the use of non-competes or non-solicitation agreements with the owners and buyers/sellers of a business in connection with acquisitions. The new law likewise does not affect or prohibit “garden leave” provisions, i.e., where the employee receives advance notice of termination, during which notice the employee continues to be “employed” and paid by the employer.

The new law also expressly codifies an extended application of the “blue pencil” doctrine, allowing an Illinois court to rewrite unenforceable provisions of non-compete agreements to make them reasonable and enforceable. In doing so, courts must consider factors such as: fairness of the restrictions as originally drafted; whether the original restrictions reflect a good faith effort to protect a legitimate business interest of the employer; the extent of the reformation; and whether the parties agreed to authorize modification of the agreement when executed. It also bears noting that the Act makes clear that “[e]xtensive judicial reformation of a covenant not to compete or covenant not to solicit may be against public policy . . . and a court may refrain from wholly rewriting contracts.”

The new Illinois law comes on the heels of President Biden’s Executive Order on Promoting Competition in the American Economy, which was signed on July 9, 2021.[1] This Executive Order encourages the Federal Trade Commission to “consider . . . exercis[ing] the FTC’s statutory rulemaking authority . . . to curtail the unfair use of non-compete clauses and other clauses or agreements that may unfairly limit work mobility.”

In addition, several states across the country have similarly entered into the fray and prohibited the enforcement of non-compete agreements, specifically, for low wage workers.[2] For illustrative purposes, Massachusetts prohibits non-compete agreements for employees classified as nonexempt under the Fair Labor Standards Act; Maine at 400% of the federal poverty level; Maryland at $15 per hour or $31,200 annually; New Hampshire at $14.50 per hour; Rhode Island at 250% of the federal poverty labor or those individuals nonexempt under the FLSA; Virginia at the average weekly wage in Virginia; Washington at $100,000 for employees or $250,000 for independent contractors (both annually); Oregon at $100,533, and Nevada at the wage threshold of whether an employee is paid solely on an hourly wage basis. As the workforce shortage across the county continues, the tightening of restrictive covenant laws and regulations will likely become a growing trend both federally and across the country.

Illinois Employers Should Review their Agreements for Compliance

As for Illinois employers, they should begin reviewing their practices and standard documents related to restrictive covenants now to ensure compliance by January 1, 2022. Although the new law does not appear to apply to agreements entered into and in place prior to the effective date, employers should have a plan in place for new agreements going forward.

How to get a divorce without going to court

Thu Sep 9 , 2021
Divorce or separation can be hard, and going to court can only add pressure to the process. Photo: Getty Images Mark Harrop and Farhana Shahzady, who are both directors, solicitors, mediators and collaborative lawyers from the Family Law Partners team in London, are here to discuss some alternative dispute resolution […]